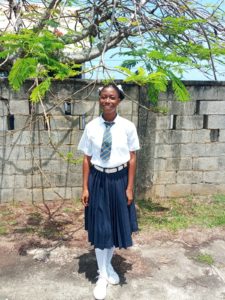 Meet seventeen (17) year old Ashida Thomas, from La Fillette, St. Andrew.  Ashida was a past student of St. Mary’s Catholic School.  During her time there, she was an active student academically and in extracurricular activities.  Those ventures created avenues that allowed her to represent the school in various competitions which included: Courts reading competition, National Spelling Bee and St. Andrew’s North West constituency independent quiz.  Ashida was a part of the Girl Guides and 4H Clubs.  In 2016, she secured the 59th position at the CPEA examination; consequently, being the top performer for the school, achieving the valedictorian position at the graduation ceremony.  Ashida was awarded the principal’s award of excellence, the A & V George award and various subject awards.  She remained active and exceptional while continuing her educational journey at the St. Andrew’s Anglican Secondary School (S.A.A.S.S.).  The Blue Ribbon for Excellent Performance in she received in forms three (3) and four (4), she was a member of the student Body Council.  Accordingly, she was among the “SAASS All-Stars” for top CSEC performers for the school.   Ashida is now awaiting graduation from her Secondary School but have since been accepted at the T A Marryshow Community College, pursuing an Associate Degree in Psychology.  She attained 12 out of 13 subjects in 2021 with excellent grades.  Add Math was her only exemption.   Her parents had this to say. “I’ve been receiving assistance from GRENED for the past four years.  It was beneficial financially and the personal

development sessions and mentorship programme were very valuable and educational.  Initially, I did not particularly appreciate giving speeches and socializing; however, attending the sessions hosted by different professionals I have managed to get out of my shell and face the world head-on.  The public speaking sessions hosted by our academic enrichment facilitator, made me become more confident.  I gave more speeches without being visibly scared.  One of my fondest memories was reciting the poem I had written for the oral part of my English A SBA to my entire class without any shyness, which secured a perfect score.  I am incredibly grateful to GRENED and all the facilitators who encouraged me to be more vocal and sociable with others in a more relaxed and comfortable way, essentially making it more fun and natural to make friends.  Moreover, capitalize and harness my creativity to routinely act out scenarios.  Overall, I am genuinely thankful and appreciative for their service as it is evident that their assistance changes live for the better.”  Ashida Thomas.